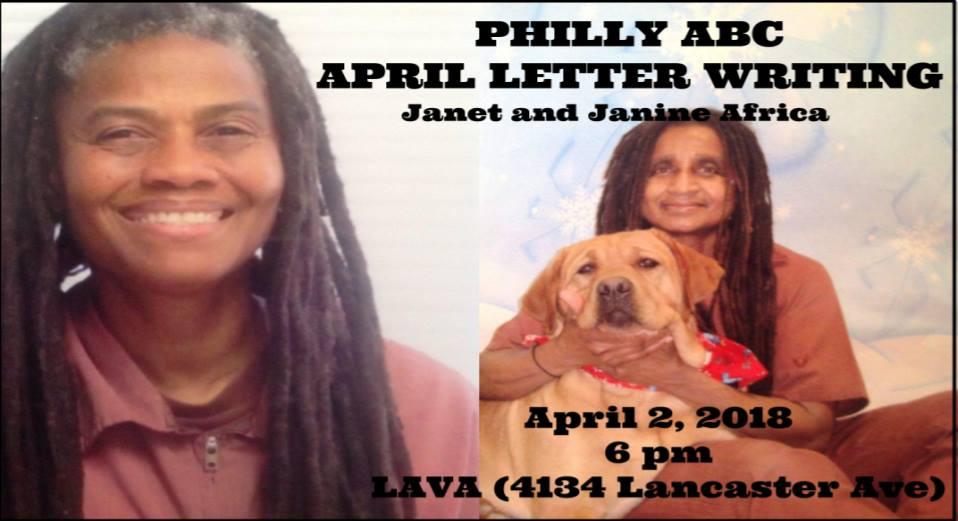 On 04/02/18 Philly ABC will be hosting a letter writing event to Janet and Janine Africa, 2 members of the MOVE 9. Please join us at LAVA in writing letters to these rad folks, who also happen to be having birthdays in April — Janet on the 13th and Janine on the 25th!

The August 8, 1978, police attack on MOVE followed years of police brutality against MOVE and was a major military operation carried out by the Philadelphia police department under orders of then-mayor, Frank Rizzo. Mayor Rizzo’s reputation for racism and brutality was and is well known–it followed him up through the ranks of the police department to the police commissioner’s office to the mayor’s office.

During this attack, heavy equipment was used to tear down the fence surrounding our home, and cops filled our home with enough tear gas to kill us and our babies, while SWAT teams covered every possible exit. We were all in the basement of our home, where we had 10 thousand pounds of water pressure per minute directed at us from 4 fire department water cannons (for a total of 40 thousand pounds of water pressure per minute). As the basement filled with nearly six feet of water we had to hold our babies and animals above the rising water so they wouldn’t drown. Suddenly shots rang out (news reporters and others know the shots came from a house at 33rd and Baring Street, not our home, because they actually saw the man shooting) and bullets immediately filled the air as police throughout the area opened fire on us. Officer James Ramp, who was standing above us on street-level and facing our home, was killed by a single bullet that struck him on a downward angle…Nine of us were charged with murder and related charges for the death of James Ramp.” ( http://onamove.com/move-9/ )