We’re pleased to share the success and reportback from the fifth annual Philadelphia Running Down The Walls in support of political prisoners and prisoners of war.

It was a consistent 70 degrees with intermittent rain showers on Sunday September 11th. Despite the soggy weather, around 150 participants began arriving around 10am. We kicked off the day with an inspiring Yoga warm-up led by Sheena Sood.

Did you say Yoga warm-up? In the rain?

That’s right! A crowd participated in a drizzly Yoga warm-up as the remainder were checking in and setting up tables. Sheena was on point as always bringing revolutionary intention to the day. She also shared inspiring quotes from Albert Woodfox who we were blessed to have join us last year, warming up our hearts and minds as well as our bodies.

Joining us again after emceeing the 2020 event, was hip-hop artist and organizer Blak Rapp Madusa of the Dignity Act Now Collective . Once the warm-up concluded, Madusa rallied the first group of mostly walkers, commencing the 5K at around 11:30am. A medium-paced group started shortly after, followed by a group of runners taking off 10 minutes later. Once all three groups completed the 5K, we gathered for a group photo on an adjacent hill, and then regrouped at the picnic area for refreshments and speeches.

The first speaker was author of Free the Land and MXGM Philly member - Brother Onaci . He provided an overview on the Malcolm X Grassroots Movement, and some of the current projects in motion both in Philly and within the broader movement. See Brother O’s speech from Unicorn Riot’s live stream here.

We are organized around defending the human rights of all Afrikan people. We are organized around freeing political prisoners, demanding reparations, ending genocide against Afrikan people, and ending sexist oppression. We have a number of programs nationally … including the New Afrikan Scouts, including community self defense, and including political education. And right now we’re trying to organize in Philly around these various principals, through these programs, alongside the Jericho Movement and our other comrades in the broader movement to free us all.

Next we read a condensed version of a longer statement from Toby Shone, an anarchist political prisoner out of the so-called UK. He was arrested by counter-terrorism cops in November 2020 as part of “Operation Adream” - an attempt by the UK government to silence dissent and criminalize anarchism. Toby and several other prisoners locked inside HM Prison Parc (a private G4S facility) ran down the walls with us, making it the first ever prisoner-organized RDTW event on the other side of the Atlantic ocean.

Madusa took the mic again to give a shout out to Toby and numerous other prisoners from several facilities that joined us in this solidarity 5K. The crowd repeated the names as the ones we had were read aloud . Some of the prisoners joining us this year were:

The next speaker was former political prisoner and prisoner of war, Jihad Abdulmumit. Jihad became a member of the Black Panther Party at the age of 16 and eventually went underground in the ranks of the Black Liberation Army. He was later captured and incarcerated for 23 years for his involvement in the Black Liberation Movement. Jihad himself was recipient of the Warchest during his time, and we were thrilled to have him join us from Richmond, VA with his family this year. See Jihad’s speech here.

My name is Jihad Abdulmumit. I am a former political prisoner, member of the Black Liberation Army and the Black Panther Party, representing my comrades that are still in prison, captive, and all those that are not part of the party also. I am the Chairperson of the Jericho movement. I am on the Board of the Abolitionist Law Center. I see my comrade Saleem is here as well. I am part of the Spirit of Mandela coalition. If you haven’t heard of that, you need to google Spirit of Mandela. We had a tribunal last year charging the United States, again, for the genocide of Black, Brown and Indigenous people, which I will speak about just a little bit in a moment. And I am part of the Jama’at of Uthman dan Fodio, a Muslim community throughout the United States. … How long have we been running down the walls? Several decades. I came home in 2000. Right before that, because of the Warchest, I was able to get my paralegal degree. So I was able to get coffee– I am a coffee drinker, thank you. There’s something seemingly innocuous about that, and I was also able to pay for my books for my schooling. That’s the extent, breadth and scope of the Warchest.

The last speaker was former Black liberation soldier and anarchist prisoner of war, Ojore Lutalo. He was arrested in 1975 with Kojo Bomani Sababu after they attempted to rob a bank to fund revolutionary projects, which ended in a shoot out with police. During his 28 years of incarceration he was placed in Trenton State Prison’s Maximum Control Unit (MCU) - a special sensory deprivation unit reserved for political prisoners and prisoners of war. Ojore was also a co-founder of the ABCF , and is the person who initiated the Warchest program in 1994.

In isolation, in the Management Control Unit, we created the Anarchist Black Cross Federation [and] created the Warchest program. … Since then, the ABCF has been supporting political prisoners… Drugs are a major problem in our communities and in the prison system. … That’s one of the reasons they kept me in the control unit for 22 years [is] because I was teaching against that. I was teaching that we had a right to rebel. I was teaching that we were oppressed, and we don’t have to remain oppressed.

We were honored to have former political prisoners and prisoners of war, Ojore Lutalo, Jihad Abdulmumit, Daniel McGowan, Lore-Elisabeth Blumenthal, Mike and Debbie Davis (Africa) join us in person this year. We’d like to thank Unicorn Riot for live streaming and Hate5six for filming the event.

We thank Food Not Bombs Solidarity for the snacks and refreshments, Here & Now Zines, IWW, Socialist Rifle Association, and Mobilization for Mumia for tabling, and to Latziyela and Come On Strong for printing the shirts. We thank Blak Rapp Madusa for emceeing, Sheena Sood for leading the Yoga warm-up, and Philly Muslim Freedom Fund for their contribution to the Warchest.

Many thanks to MXGM Philly for supporting and co-sponsoring the event, and the ~200 people who participated in person or remotely - inside or outside prison - from California, Bridgend (UK), Massachusetts, Minnesota, New Jersey, New York, North Carolina, Oregon, Pennsylvania, Virginia, and Tokyo (JP).

Together we raised $11,607 to be split between MXGM Philly and the ABCF Warchest that sends monthly stipends to 17 political prisoners and prisoners of war with little or no financial support. A full breakdown of Warchest funds in and out since 1994 is available here (updated July 2022). Funds available beyond the reserved amount needed for the monthly stipends will be disbursed as one-time donations to other political prisoners who demonstrate financial need, or to the release funds of the next comrades to come home.

We look forward to more successes in the next year as we further the struggle to free all political prisoners and abolish the carceral system! As an extension of last year’s focus, a meeting was held after the event to organize support for Mumia’s upcoming court date. Mumia’s attorneys are litigating the six boxes of previously undisclosed evidence that were illegally withheld from Mumia’s prior trial and appeals, and could potentially reverse the conviction.

On October 19th, a judge said she will issue a ruling on the petition to remand the case back to the Philadelphia Court of Common Pleas. It is critical that we pack the court on this day, which is the 3rd Wednesday in October. Save the date in your calendar!

We also want to take the opportunity to invite you to the Memorial for Maroon and 6th Annual Prisoners’ Families Brunch on Saturday, October 8, 2022. The event is taking place from noon to 4pm at One Art Community Center (1435 N. 52nd St.) and it’s completely free! That includes free food, drinks, entertainment, speakers, and information. Join us as we celebrate the legacy and memory of freedom fighter Russell Maroon Shoatz, and show support for family and friends of our community members who are or have been incarcerated. 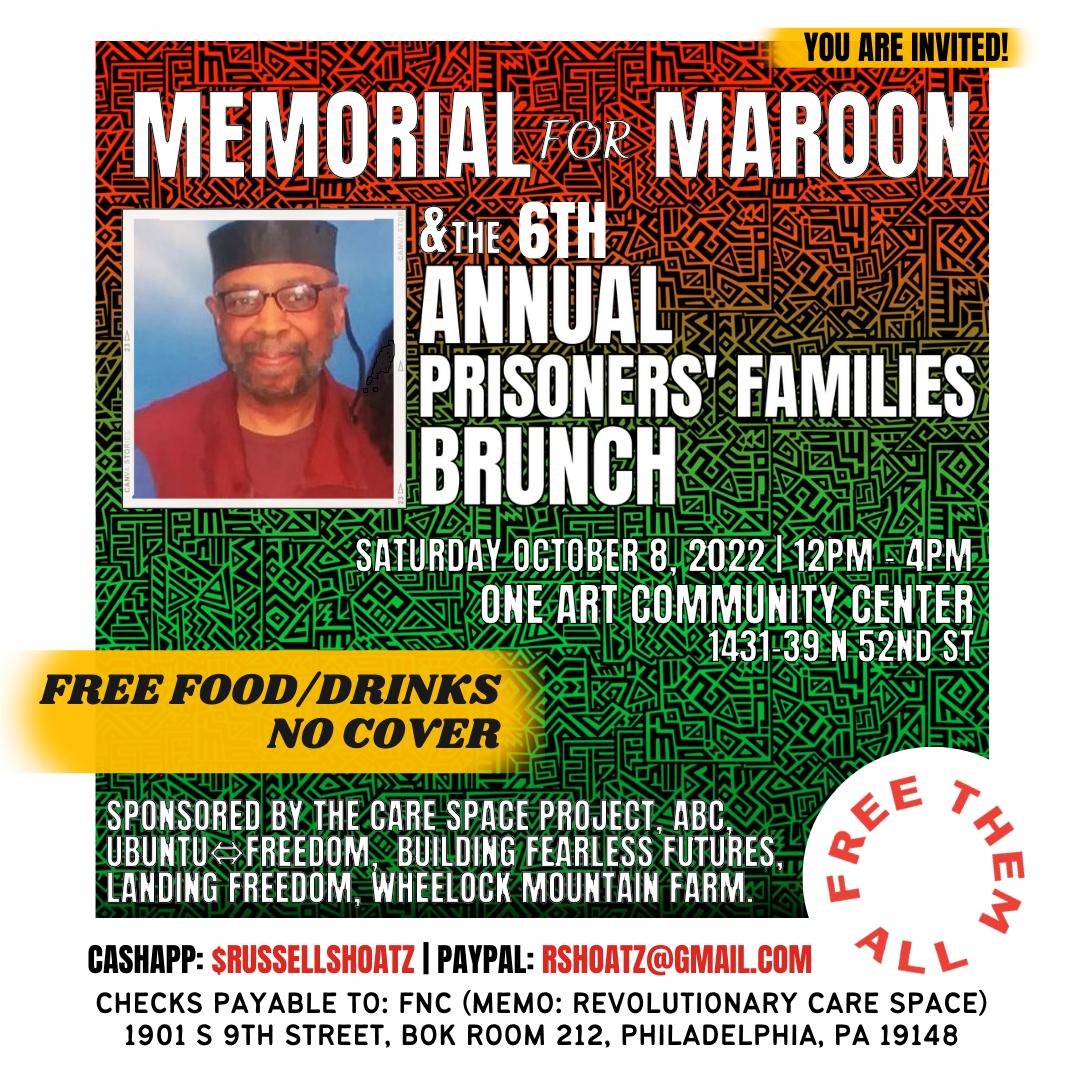 We want to close this out by commemorating former Angola 3 political prisoner - Albert Woodfox. After serving 43 years in solitary confinement, longer than any prisoner in US history, he was released on his 69th birthday - February 19th, 2016. We were honored that Albert traveled all the way from New Orleans to join us in person at last year’s Running Down The Walls. The energy and perspective he brought was inspiring and resonating. 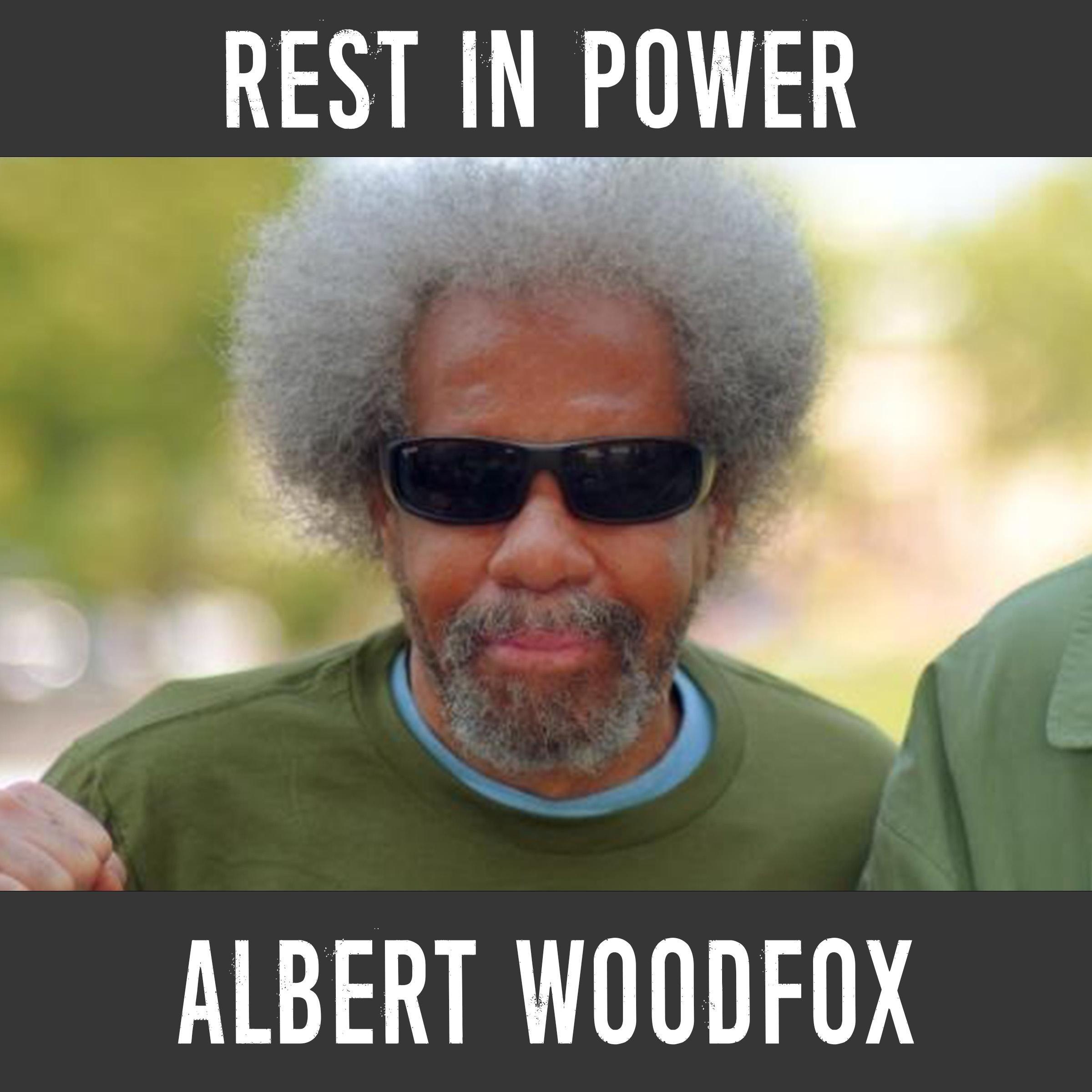 Albert joined the ancestors on Thursday August 4th, 2022. Our hearts go out to all who were close to him, and we will keep fighting in his honor. #RestInPower comrade.

Until all are free,
Philly ABC