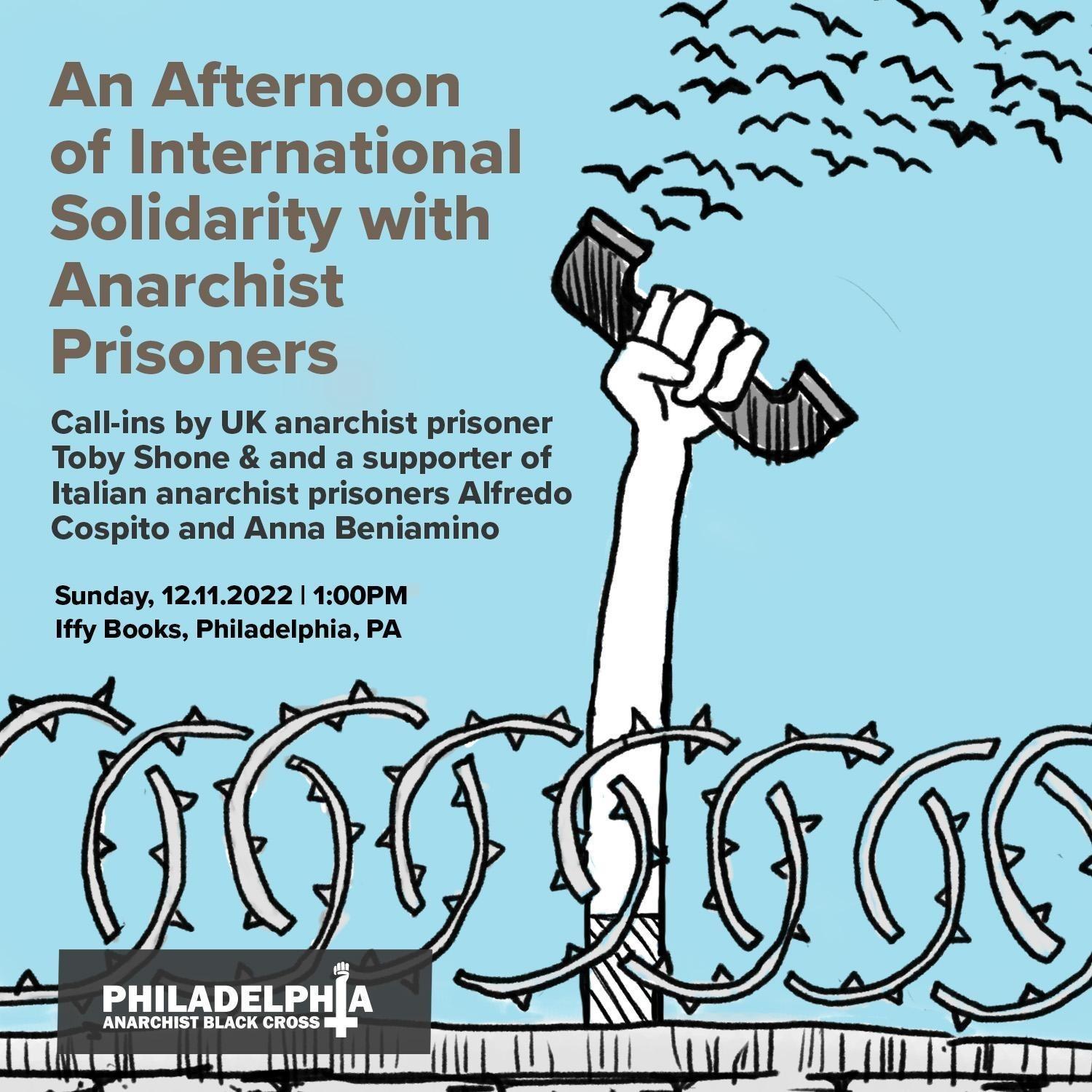 Philly ABC invites you to join us this Sunday, from 1:00 - 3:30pm at Iffy Books (319 N. 11th St. #3E) for an important afternoon of international solidarity with anarchist prisoners across the pond. It is our firm belief that political education and solidarity work should extend far beyond the borders of the territories we live in and fight against. In this special event we’ll be hearing from UK-held anarchist prisoner Toby Shone and from a supporter of Italian anarchist prisoners Alfredo Cospito and Anna Beniamino.

Toby Shone was arrested by counter-terrorism cops in November 2020 as part of “Operation Adream” - a series of coordinated raids against the anarchist website 325.nostate.net, and part of an ongoing attempt by the UK government to silence dissent and criminalize anarchist beliefs.

He plead not guilty to charges under the UK Terrorism Act, and was set to stand trial on October 6th, 2021. However, with no evidence to put before the court, the Crown Prosecution Service (CPS) was forced to drop these charges on October 1st, leaving a sentence of 3 years and 9 months for psychedelic drugs found during the raid.

Out of spite, the prosecution and Counter-Terror Unit also attempted to apply conditions of the Serious Crime Prevention Order (SCPO). If granted, the police and Counter-Terror Unit would have been able to control, monitor and surveil Toby’s electronic devices, finances, residence, visits to the residences of others and other movements, and his entire associated social, professional and political network for five years following his release, with the prospect of returning Toby to prison for an additional five years if conditions were breached. Their efforts failed again on May 6th, 2022, when a High Court Judge refused the order on account of “No Necessity,” even going as far to say the order is draconian even for ’terrorist’ offences.

The next juncture for revenge against Toby comes at his mandatory prison release on December 28th. Without any legal basis whatsoever, the Counter-Terror Unit, MAPPA (Multi-Agency Public Protection Arrangements) along with the Probation Service have used experimental de-radicalizaton measures to place Toby in their highest risk categories and have drafted the following release conditions which are more extreme than that of SCPO:

For a deeper dive into this latest effort against Toby, what he faces in the road ahead, and what we can learn from this case, see the full October 22nd update from ABC Brighton and join us for his call.

Similar repression against anarchists exists all over the world. In Italy, anarchist prisoners Alfredo Cospito and Anna Beniamino are being given life sentences after accused of an explosive attack that didn’t harm anyone. On May 5th, 2022, Alfredo was moved to the 41bis prison regime, a regime based on total isolation, sensory deprivation, and “white torture.” He began an indefinite hunger strike on October 20th. Anarchist prisoner Juan Sorroche has also joined the hunger strike together with Anna, Ivan, and Toby.

Together with these heavy sentences, several comrades are being charged with incitement to revolt and apology of terrorism for writing in journals and websites: there is a clear attempt to silence all forms of anarchist speech. Normal repression? Something more, a warning for all those who struggle without compromise inside and outside prison and who haven’t stopped believing in the practice of direct action and revolutionary solidarity.

This is not an Italian exception but rather a European trend, given the numerous investigations and detentions involving anarchist comrades in England, France, Spain and Greece, and it is clear that the attack on anarchists can only be understood in the context of the permanent state of emergency and war in which we have been immersed for two years now (strengthening of the state and its control over the population, increasing powers given to police forces, experimenting with “red zones” and curfews, harsh repression in the streets and in the workplace, increasing technological control and increase of prices of essential goods and general impoverishment the consequences of which, also in terms of conflict, are hard to imagine, but against which the state is already preparing its countermeasures).

The attack against our comrades is an attack against all those who won’t surrender to a system based on the exploitation of all living creatures and the destruction of human beings and the planet. Let’s mobilize to prevent the advancing of repression, life sentences and the 41bis special security regime. Let’s come together, coast to coast, to build and strengthen our support and solidarity for comrades worldwide.